5G is the next generation of mobile technology, which has been used by New Zealanders since the introduction of the mobile phone in 1987. Just like radio, television and baby monitors, it uses radio waves to carry messages.

5G will initially use radio frequencies (3600MHz range) very similar to 3G and 4G before it, and while eventually it will use radio frequencies at higher levels (such as millimeter waves), this doesn’t result in higher or more intense exposure. Exposure levels will remain well below limits set by the New Zealand Government, and Spark will continue taking great care to comply with these limits.

We understand there is a lot of misinformation across social media about 5G – so we strongly encourage people to get their information about 5G from reliable sources such as:

Yes, it is. Exposure to radio waves is regulated by the New Zealand Government and are based on decades of scientific research. These regulations limit exposure levels to 50 times lower than the point at which radio waves could have any impact on the human body.1 Read the National Environmental Standards for Telecommunications Facilities

Our 5G cell towers in Palmerston North have been tested for radio wave exposure levels in accessible locations, and the maximum possible exposure was just 0.64% of what’s allowed under the New Zealand Standard.2

The Ministry of Health says, "there is nothing unique to 5G that would make it interact differently with the body than other radio frequency fields [radio waves].”3 The radiation emitted by all mobile technology, including 5G, is non-ionising which means it doesn’t carry enough energy to damage our DNA.4

5G has the potential to bring super-fast downloads, minimal latency (or lag), as well as massive connectivity and reliability, opening up huge possibilities for business and the way we live.

Smart phones, iPads, the new digital curriculum in schools and streaming services like Netflix have all led to unprecedented growth in demand for digital services, so moving to the next generation will be critical in maintaining network capacity to support a growing population of Kiwis and our appetite for these types of technologies.

5G can also play an important role in supporting New Zealand’s economic recovery from Covid-19. With each new generation of mobile technology businesses and consumers have benefited from innovation and improved productivity and efficiency, and 5G promises to be transformative for many industries.

Why are some people concerned about 5G?

We understand that a change like this can feel daunting for some people, so we are doing what we can to help people understand what 5G is. Psychology professor, Marc Wilson from Victoria University said concerns about 5G come down to increasing public concern around the risks that modern life poses for health. He says, “our world is changing rapidly, so we’ve had little chance to used to radical, scientific advances and this makes us worry about the consequences.” He calls these ‘concerns about modernity.’5

In terms of conspiracy theories, Ben Decker of the Global Disinformation Index, which aims to disrupt, defund and down-rank disinformation sites, has traced the ‘Stop 5G’ narrative back to its origins in a case study. Read the case study here

How do we know 5G is safe when it’s a new technology?

There are a number of reasons for this:

What about the people who say radio waves are making them sick?

There are some people who report a wide variety of health problems that they believe are caused by exposure to radio waves – this has been termed “electromagnetic hypersensitivity” (EHS). Many studies have been conducted where EHS individuals were exposed to radio waves. The results show that EHS individuals can’t detect radio wave exposure any more accurately than non-EHS people, and conclude that there is no correlation between their symptoms and exposures.8

Does 5G cause cancer?

A huge amount of research goes in to trying to understand what causes cancer, however it is impossible to tell for sure what caused it in any person. Radio frequency radiation was classified as a Group 2B, possible human carcinogen by the International Agency for Research on Cancer (IARC) in 2011. The Chief Science Advisor says, “This category catches many commonly encountered things, such as pickles and dry cleaning, and represents a lower hazard rating. To put this in perspective, even the classification above this, ‘probable human carcinogens,’ includes widely encountered activities including drinking very hot drinks and working night shifts.” 9 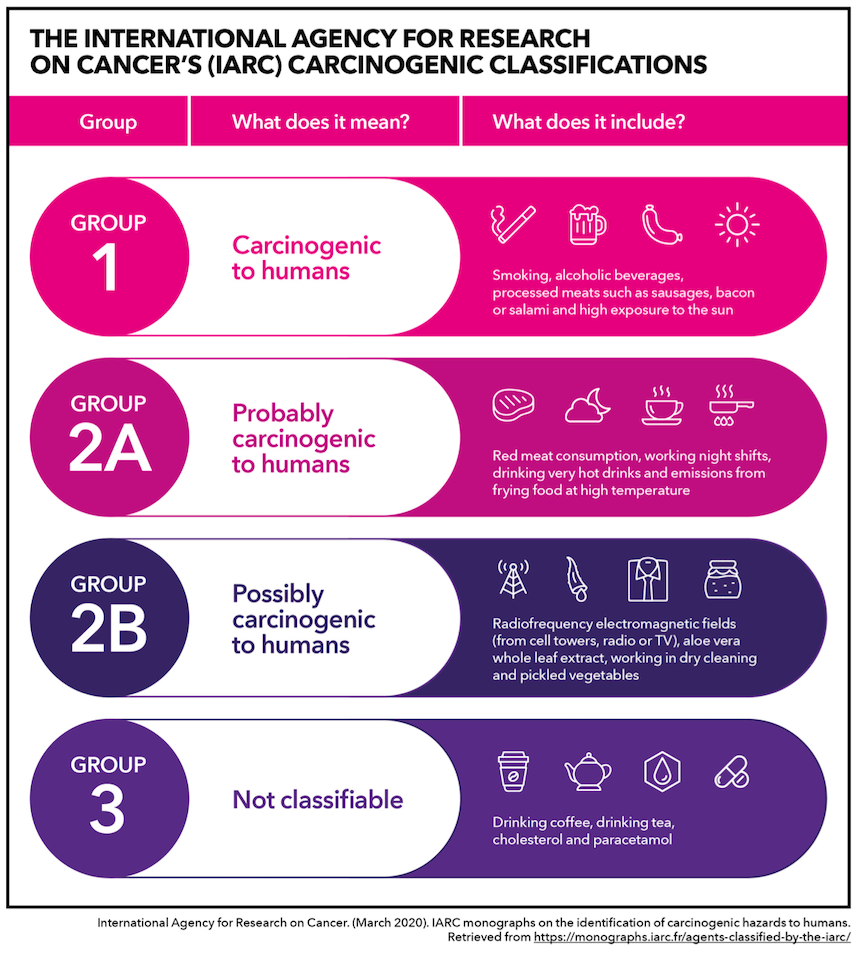 Is 5G going to require more cell towers and will that increase exposures to radio waves?

Once we start using higher frequencies, radio signals won’t travel as far, thus more ‘small cells’ attached to buildings and other infrastructure will be required to provide full 5G coverage. This won’t result in higher exposure levels because each site will be serving a smaller area so will operate at lower power than 3G and 4G cell towers.4

5G networks will also eventually use a technology called ‘beamforming’, which directs radio waves where they’re needed in a way that is more efficient and improves the quality of the signal. This means the potential for exposure is smaller compared to 4G.9

Will 5G have a negative impact on the environment?

While there are stories and images circulating the internet which seemingly convey the death of birds and trees due to being located near 5G towers, they are not true.

There are concerns that trees may be removed because like buildings, they can weaken 5G radio signals. At Spark we don’t remove obstructions (unless required by a landowner), but plan our coverage footprint and place cell sites as best as possible to allow for this. Trees are offered protection under the Resource Management Act. Read the Act

A common story behind the belief that 5G kills birds is that hundreds of starlings were found dead after a 5G trial took place in the Netherlands, however the two were not related. The only 5G testing in the area where the birds were found had been done four months prior, was about 3km away and only lasted one day.3

Questions about security are to do with the widespread deployment of Internet of Things (IoT) devices which will be enabled by the faster speeds and greater data capacity of 5G (not with the 5G technology itself). We’re living in an increasingly connected and data driven world, and the connection of more IoT devices will mean more data is being collected. But as this technology evolves, so too does the security and privacy barriers that protect it and in turn, we’ll all be able to enjoy the benefits IoT will bring.

Want to talk to us?